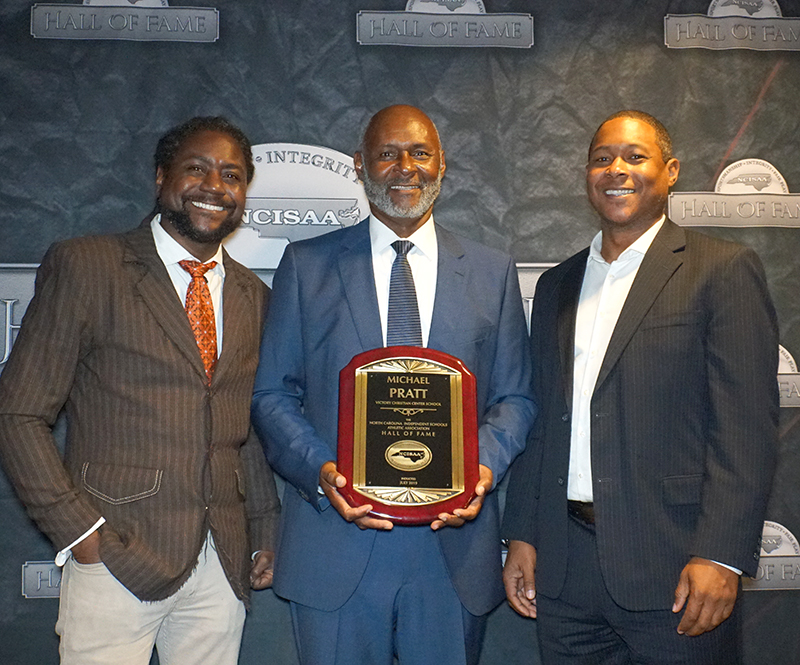 Michael P. Pratt graduated from North Carolina A&T State University, in 1975, with a B.S. in History Education. He received his Master’s Degree in Education Administration form UNC-Charlotte in 1988. He took the lessons learned from his college classrooms, plus his experiences teaching in the public schools to help start the Victory Christian Center School in Charlotte, N.C. For the next 27 years, he helped build a three-campus institution. Not only did he build facilities, but he also built up students. In 1995, Mike was named “Administrator of the Year” by the OREUF. Mike wore many hats including coach, athletic director, and Headmaster. He was the face of the school. Victory Christian was his calling and life’s passion. Mike was Varsity Women’s Basketball Coach from 1990 to 2005. During that time, he amassed an overall record of 415-76 winning 13 conference titles, 5 NACA National Championships, and 6 NCISAA State Championships. His 2003 team was recently named the All-Time Best Women’s Team in Charlotte. While serving on the NCISAA Board of Managers for 12 years, Mike was a voice for the 1A schools and served in several capacities on the board. 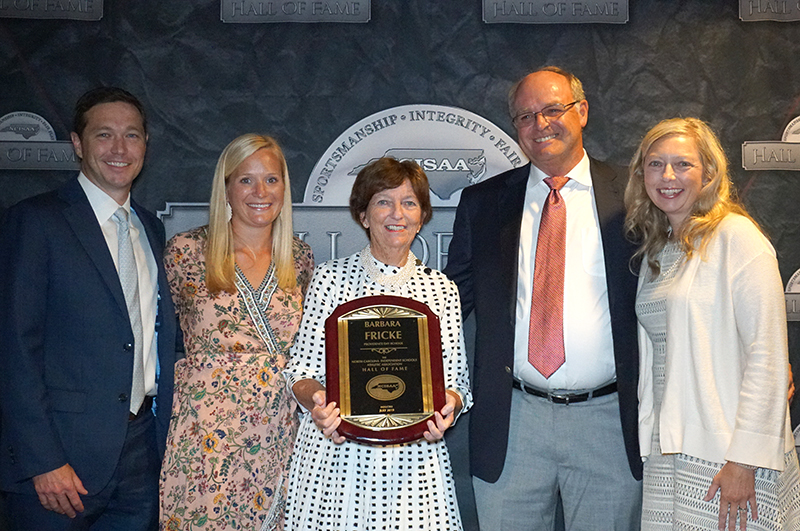 Barbara T. Fricke graduated from the Northeastern University School of Education in 1973. She continued her education earning a M.A. in Curriculum and Instruction from Chapman College, as well as a M.A. in Counseling from Cambridge College. All throughout her education experience, she participated in multiple sports, both competitively and for recreation. Barbara began at Providence Day School in 1986. In her 7th year, she was named Athletic Director. Her selection was groundbreaking because she was one of only two female AD’s in the state of North Carolina. Barbara branched out the department and created new sport programs which resulted in growth and participation at all levels. Her philosophy was simple: “It is a game, not a war; they are a rival, not an enemy; there are no losers.” Barbara served on the NCISAA Board of Managers from 2004-2010. She helped to craft many of the rules in our handbook and was the sole voice of the female athletic administrator. She built and steered a program that gained national recognition not only for winning, but also for how the program was administered. She is a role model to all athletic administrators. 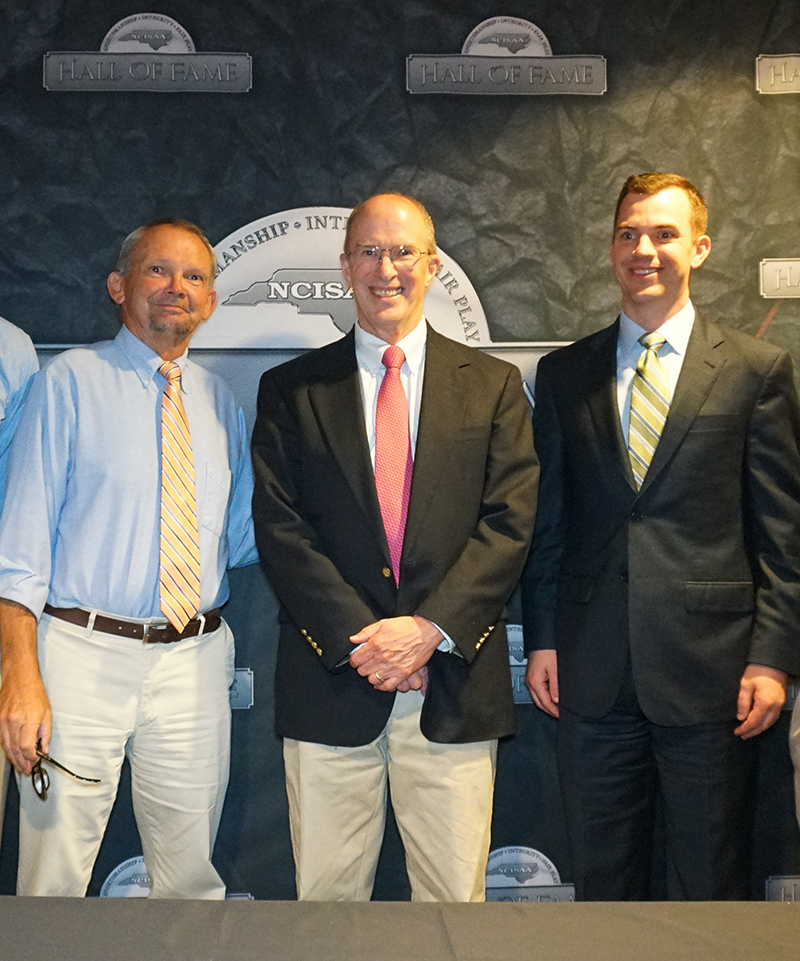 Dennis M. Cullen graduated from Dartmouth College in 1972 and with a Masters from Harvard University. He moved to North Carolina in 1976 to begin teaching at Durham Academy. He has taught mathematics at Durham Academy, served as a Math Department Chair for 36 years, and was the Head Track and Cross Country Coach for 39 years (1976-2015). He is the example of a private school teacher and coach. Dennis is one of the most respected coaches in North Carolina. In 1976, his first year, he led the boys’ cross country team and the girls track team to NCISAA championships. This success continued with Durham Academy winning 39 NCISAA state championships in boys and girls track, and cross country. Included in the championships was a streak of 13 consecutive championships in boys’ cross country. In 1991, he received the Laurel Wreath Award. This is the state’s highest award for athletic achievement. Durham Academy has recognized him with many honors and awards including induction to their Athletic Hall of Fame in 2013, and the Faculty and Staff Legacy Award in 2017. In 2016, the NCISAA honored Dennis by naming the Girls 3A Track and Field trophy in his name. 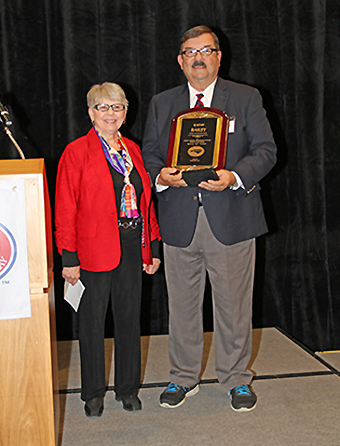 Kathleen A. Bailey attended Capital University, University of Akron, and later UNC-Asheville. Her plans to pursue a medical career were interrupted by family concerns, and in 1978, she moved to Asheville, NC where she accepted a job at Asheville School and became acquainted with Chuck Carter. In 1985, after Chuck had been elected President of the NCISAA, he asked Kathy if she would assist him in placing the organization on firm operating and financial footing. She was asked to play a major role in organizing and expanding this state-wide athletic entity which was operating in the red at that time. While the books were soon solvent, there were times when she did not accept her meager paycheck until after tournament revenue had been received and the bills had been paid. Kathy’s loyalty has not wavered during the 31 years since. Kathy has been a real partner to both the NCISAA and to Chuck Carter in a way that is impossible to properly convey. For her unwavering efforts, she received the NCISAA Service Award in 2013. The listing of all she has done for the NCISAA would be too numerous for this occasion. Suffice to say that the NCISAA has not been in debt since that first year and has continued to be solvent in large measure due to her diligence. 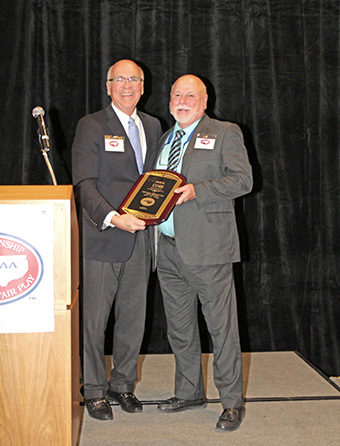 Doug R. Cobbs, Sr. was born in Richmond, Va. and attended John Marshall High School. He played multiple sports during his high school career, a theme he would carry throughout his professional career. He attended Virginia Commonwealth University and received a B.S. degree in Health and Physical Education. After 14 years as a teacher and coach of multiple sports at Fredrick Military Academy, he moved to Ridgecroft School, where he spent the next 30 years as a teacher, coach, and Athletic Director. During his tenure, he taught Health, P.E., and History. He coached soccer, boys basketball, girls basketball, and softball. He served the NCISAA on the Board of Directors/Board of Managers for 25 years, retiring in the summer of 2015. He was a part of the growth of the NCISAA into 3 divisions, the inclusion of 7th graders in varsity sports, and was the Sport Chair for Softball as it transitioned from slow pitch to fast pitch. Doug always put the kids first and has always been the voice for the 1A schools. In 2015, the NCISAA honored Doug Cobbs and his career by naming its Distinguished Service Award on his behalf. 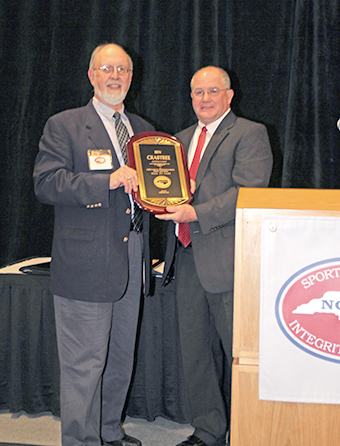 Benjamin M. Crabtree was born in Graham, N.C. He attended Presbyterian College in Clinton, S.C. At Presbyterian, he received a B.S. in Biology and earned his Master’s Degree in Educational Administration from Western Carolina University. In 1988, after serving as the Assistant Head of School at Christ School, he became the Head of School at Fayetteville Academy. He served in that capacity for 16 years, retiring in 2004. At Fayetteville Academy, he formed the CPIC Conference, served as its President, and represented its members on the NCISAA Board of Directors. He served as President of the NCISAA Board of Directors from 2001 to 2004. As a board member, he oversaw the expansion of the NCISAA from one division to two divisions, gave foresight to regular season regulations and governance, and helped create documents that are used today to report member schools information to the NCISAA State Office. 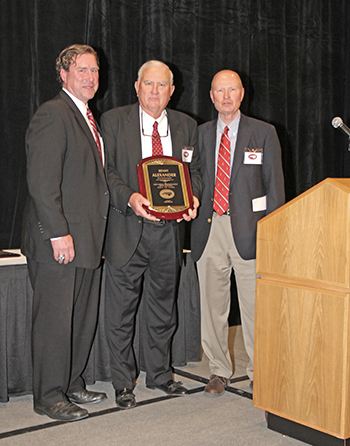 Earnest B. “Benny” Alexander, a North Carolina native, graduated from Atlantic Christian College, now Barton College. While at Atlantic Christian College, he played basketball, majored in Health and Physical Education, and met his wife, Sandra. He began his private school career in 1970 at Ravenscroft School. After 4 years, he moved to Rocky Mount Academy where he served as Athletic Director, Head Varsity Men’s Basketball Coach, and Varsity Golf Coach for most of the next 30 years. Benny was one of the volunteers that helped, then President Jimmy Williams begin to organize the NCISAA. Benny served on the first Board of Directors, the governing body for the NCISAA. Over the next 15 years, he served as the basketball Sport Manager, and was the Director of the 1A State Basketball Tournament. He secured the Hardee’s Corporation as the NCISAA’s first corporate sponsor. Mr. Alexander could be counted on to always speak his mind, and due to that, the NCISAA and its tournaments were improved. Rocky Mount Academy honored Mr. Alexander for his service by naming the school’s baseball stadium after him. In 2010, the NCISAA named the 1A Basketball Championship Trophies after him for his dedication and service to the 1A basketball tournament.

James W. Broadway, a North Carolina native, graduated from Wake Forest University in 1969, with a B.A. in Physical Education and a minor in Math. While at Wake Forest, Jimmy played four years of ACC basketball and coached the freshman team for one year. In 1970, Jimmy began work at Charlotte Country Day School as a math teacher and varsity basketball coach. He became head of the PE department and also went on to coach track, tennis, and JV football. In 1978, Jimmy was made Physical Plant Director at Country Day School. In 1986, Broadway moved to Charlotte Latin School as the Physical Plant Director and became the Athletic Director in 1993. He served in that position for 20 years, retiring in 2012. Among many accomplishments, his coaches and teams at Charlotte Latin produced eight consecutive Wachovia/Wells Fargo Cups for success in NCISAA state play. Jimmy has served on its Board of Managers of the NCISAA a total of fifteen years. He has been director of countless NCISAA tournaments. After his retirement in 2012, he was recognized by the North Carolina Athletic Directors Association with the coveted Lifetime Achievement Award.

John B. Hardison, Jr. (1947-2015) graduated from East Carolina University in 1969. He completed his masters in Physical Education, at ECU, in 1976. In 1978, John became the Head of Hobgood Academy – one of the charter members of the NCISAA – where he served as Headmaster until 2002. In 2002, he accepted the Headship of Northwoods Collegiate School, where he remained for three years. In 1979, David Thompson, then President of the NCISAA, approached John to ask if he would be willing to serve on the Board of Directors, which he willingly and masterfully did until his retirement. During the formative years of the NCISAA, John not only served on the board but was also Vice President of the NCISAA from 1985 until 2002. His balance was also invaluable to the Finance Committee as the organization grew in size and complexity. John will always be remembered for his unparalleled sense of fairness and for his consideration of the needs for the student athletes and for all classifications with the NCISAA.

James E. Williams was the head of Wayne Country Day School in the early 1970’s when he and a group of Heads and AD’s from other eastern schools envisioned a statewide athletic organization of independent schools for the purpose of providing state tournaments. In 1973, representatives from twenty six North Carolina schools met at Ravenscroft School in Raleigh with Calvin Criner, coordinator of non-public schools for the NC Department of Public Education, who served as moderator for this initial formative session. Mr. Williams spearheaded the formation fo tournaments in boys’ and girls’ basketball, tennis, and golf for the 1974-1975 school year. These events were the first organized post season events for the group we know now as the NCISAA. When Jimmy Williams left for a position at Mount Olive College, David A. Thompson became the President of the organization.

David A. Thompson, our organization’s second President, quickly earned the trust of schools from all sectors of North Carolina and led the expansion necessary to become a truly state-wide entity. Mr. Thompson formed a working committee who, under his leadership, developed rules for state tournament in an increasing number of sports. He also procured the first corporate sponsorship for the NCISAA from the Wachovia Bank and Trust Company – a partnership that has grown and continues to this day. Mr. Thompson also laid out the groundwork for the establishment of two classifications of tournaments based upon school enrollment. He passed in 2012.

Charles N. Carter was the Director of Athletics at Asheville School from 1967 to 2007. During his tenure he expanded the school’s program from 10 to 28 interscholastic teams. Chuck’s basketball teams won 17 conference championships; his baseball team won 12 conference championships and one state chamionship. He was President of the NCISAA from 1985 to 2001 while continuing to serve as AD at Asheville School. In 2001, Chuck was appointed the first official Executive Director of the NCISAA.